If I had to narrow down the one thing that I’m best at, it would probably be the ability to spot potential and talent in people. Running my own education theatre company years ago, I managed to nab the “pick of the litter” each year. Now our TV screens, stages and award ceremonies are littered with stars who landed their first acting jobs with me, back in the day.

When I was teaching in schools, I managed to spot talent in my students, too. It gives me enormous satisfaction to see young talent reach its full potential. I love it when past students of mine come into their own and begin to soar in their chosen professions. When they acknowledge that I played a part in their journey, it’s just a wonderful bonus.

Once such past student – now young star – is actor, Sven Ruygrok.I met Sven when he was in Grade 10. His phenomenal natural acting talent was obvious to me. At the time, he was 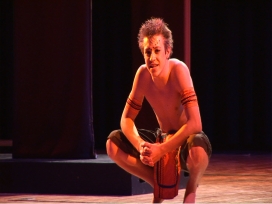 also the South African gymnastics champion in his age group. I had a gift on my hands! The school wanted a Shakespeare production that year and I had the perfect Puck. However, Sven’s competitive gymnastics meant daily time commitments for him that didn’t allow for anything else in his schedule. I chatted to him about my idea to do A Midsummer Night’s Dream, with him in the role of Puck. This put the poor kid into a major dilemma. As it turned out, this was a defining moment in his young life.

I had a couple of weeks to decide on which play I was going to commit to, so I told Sven he should take his time and think about it – the decision was his and I would understand and respect his choice either way. There were quite a few break-time chats, as he wrestled with his choice. I was certainly not going to push him in either direction. He told me, tearfully, that he loved acting with all his heart, but didn’t know if he would be able to make it a career. Many kids love acting. Many dream of becoming “stars”. I’ve been in that industry (still am, a little) – it’s hard! But Sven had a rare and real talent, as well as the drive and determination to succeed. I told him that I knew that he could and would succeed as an actor. I also told him there would be other plays and other roles and Puck was not the be all and end all. He had to make the choice on his own.

Sven probably had many sleepless nights during those couple of weeks, but eventually made his decision. He would do the play! I was absolutely thrilled – his gymnastic coach, not so much . He was totally magnificent as Puck; a role he revisited as a professional actor, in 2013. At 15, Sven made a hard decision that set the course of his life … and he’s never looked back.

Here’s his impressive biography to date:

He has appeared in numerous television series including “Bluestone 42”(2014) for the BBC, ABC studios “Of Kings and Prophets” (2016) and the National Geographic documentary “First Man” (2016)

He played the role of Puck in Shakespeare’s “A Midsummer Night’s Dream” directed by Fred Abrahamse at the Cape Town Maynardville Theatre in 2013 and won the Fleur de Cap award for best supporting actor in 2015 for the play “Epstein”. He will now be going into the stage production of “The Mother” directed by Janice Honeyman at the Fugard Theatre in 2017

I must note that seldom have I ever – before or since – worked with an actor, of any age, who had the focus and work ethic of that 15 year old Sven, in my production of “A Midsummer Night’s Dream”. He was incredible to work with and boy he WORKED! I always tell my students, “Talent can get you in the door, but it’s your work ethic that keeps you in work … and, as is the case with Sven, gets you the starring roles and awards.”

And here’s the beautiful video testimonial he made for me the other day: